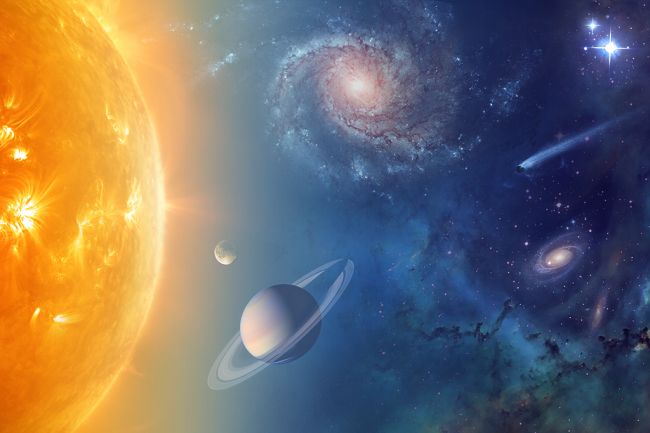 The solar system is a bizarre place with its alien planets, mysterious moons and strange phenomena that are so out-of-this-world they elude explanation. Scientists have discovered ice-spewing volcanoes on Pluto, while Mars is home to a truly “grand” canyon the size of the United States. There may even be a giant, undiscovered planet lurking somewhere beyond Neptune. Read on to find out some of the strangest facts about planets, dwarf planets, comets and other incredible objects around the solar system.

1. Uranus is tilted on its side 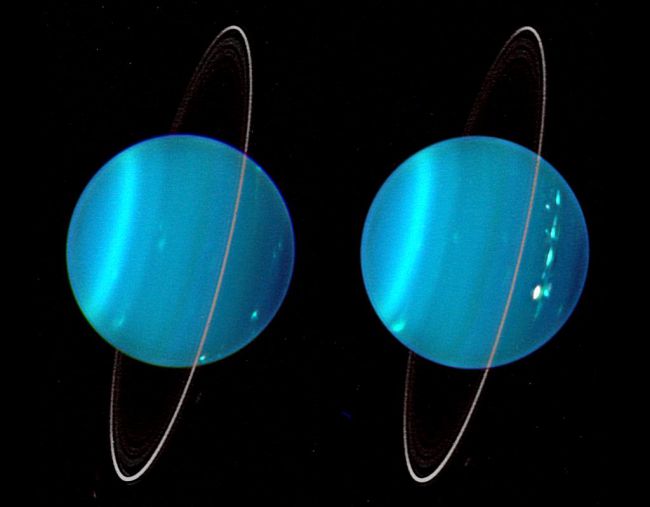 Lawrence Sromovsky, University of Wisconsin-Madison/W.M. Keck Observatory
Uranus appears to be a featureless blue ball upon first glance, but this gas giant of the outer solar system is pretty weird upon closer inspection. First, the planet rotates on its side for reasons scientists haven’t quite figured out. The most likely explanation is that it underwent some sort of one or more titanic collisions in the ancient past. In any case, the tilt makes Uranus unique among the solar system planets.
Uranus also has tenuous rings, which were confirmed when the planet passed in front of a star (from Earth’s perspective) in 1977; as the star’s light winked on and off repeatedly, astronomers realized there was more than just a planet blocking its starlight. More recently, astronomers spotted storms in Uranus’ atmosphere several years after its closest approach to the sun, when the atmosphere would have been heated the most. 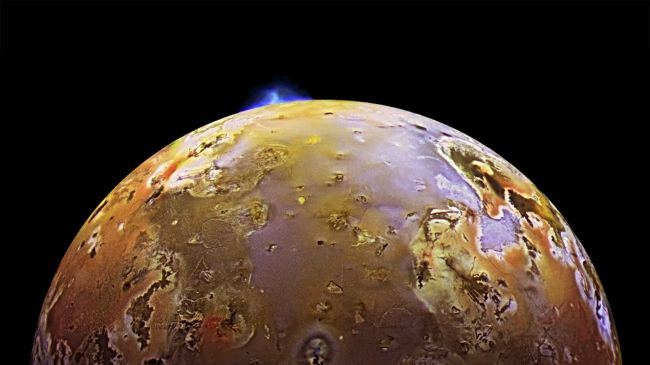 NASA
For those of us used to Earth’s relatively inactive moon, Io’s chaotic landscape may come as a huge surprise. The Jovian moon has hundreds of volcanoes and is considered the most active moon in the solar system, sending plumes up to 250 miles into its atmosphere . Some spacecraft have caught the moon erupting; the Pluto-bound New Horizons craft caught a glimpse of Io bursting when it passed by in 2007.
Io’s eruptions come from the immense gravity the moon is exposed to, being nestled in Jupiter’s gravitational well. The moon’s insides tense up and relax as it orbits closer to, and farther from, the planet, generating enough energy for volcanic activity. Scientists are still trying to figure out how heat spreads through Io’s interior, though, making it difficult to predict where the volcanoes exist using scientific models alone.

3. Mars has the biggest volcano (that we know of) 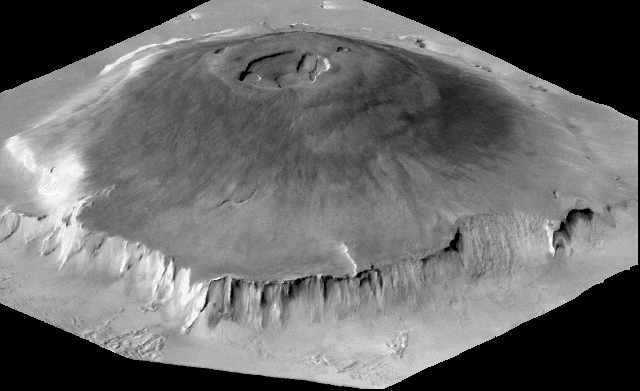 While Mars seems quiet now, we know that in the past something caused gigantic volcanoes to form and erupt. This includes Olympus Mons, the biggest volcano ever discovered in the solar system. At 374 miles (602 km) across, the volcano is comparable to the size of Arizona. It’s 16 miles (25 kilometers) high, or triple the height of Mount Everest, the tallest mountain on Earth.
Volcanoes on Mars can grow to such immense size because gravity is much weaker on the Red Planet than it is on Earth. But how those volcanoes came to be in the first place is not well known. There is a debate as to whether Mars has a global plate tectonic system and whether it is active.

4. Mars also has the longest valley 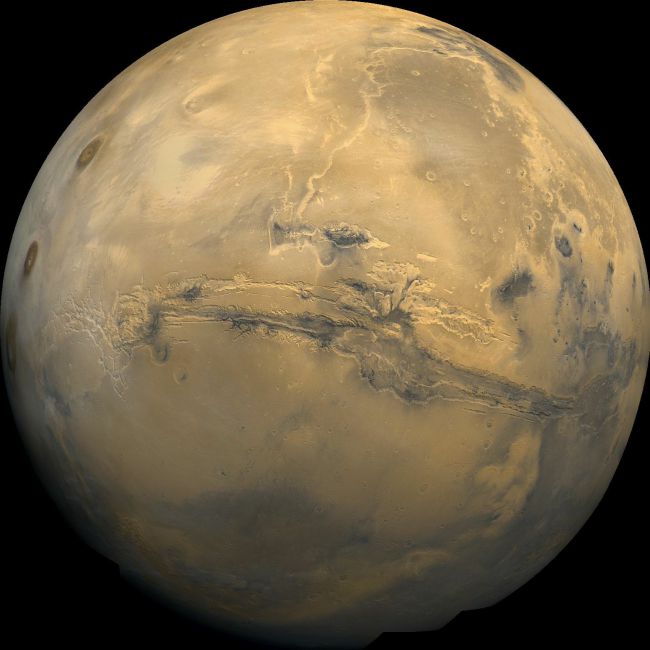 NASA
If you thought the Grand Canyon was big, that’s nothing compared to Valles Marineris. At 2,500 miles (4,000 km) long, this immense system of Martian canyons is more than 10 times as long as the Grand Canyon on Earth. Valles Marineris escaped the notice of early Mars spacecraft (which flew over other parts of the planet) and was finally spotted by the global mapping mission Mariner 9 in 1971. And what a sight it was to miss — Valles Marineris is about as long as the United States!
The lack of active plate tectonics on Mars makes it tough to figure out how the canyon formed. Some scientists even think that a chain of volcanoes on the other side of the planet, known as the Tharsis Ridge, somehow bent the crust from the opposite side of Mars, thus creating Valles Marineris. More close-up study is needed to learn more, but you can’t send a rover over there easily. 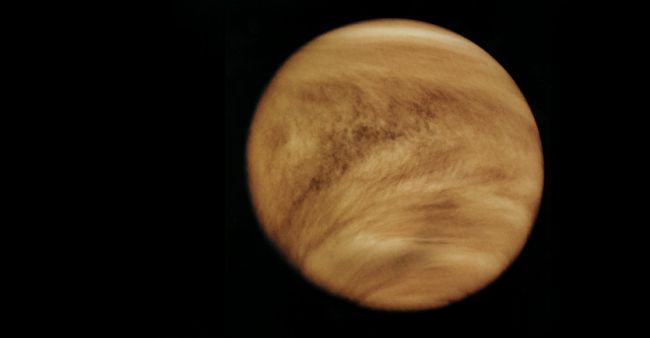 NASA
Venus is a hellish planet with a high-temperature, high-pressure environment on its surface. Ten of the Soviet Union’s heavily shielded Venera spacecraft lasted only a few minutes on its surface when they landed there in the 1970s.
But even above its surface, the planet has a bizarre environment. Scientists have found that its upper winds flow 50 times faster than the planet’s rotation. The European Venus Express spacecraft (which orbited the planet between 2006 and 2014) tracked the winds over long periods and detected periodic variations. It also found that the hurricane-force winds appeared to be getting stronger over time.

6. There is water ice everywhere 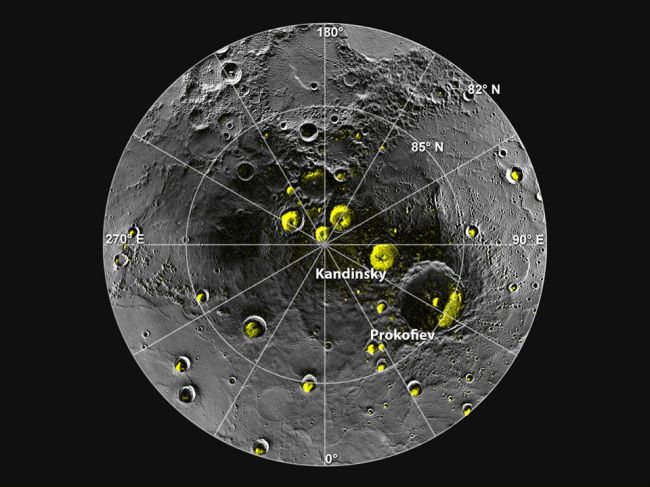 NASA/JHUAPL/Carnegie Institution of Washington/DLR/Smithsonian Institution
Water ice was once considered a rare substance in space, but now we know we just weren’t looking for it in the right places. In fact, water ice exists all over the solar system. Ice is a common component of comets and asteroids, for example. But we know that not all ice is the same. Close-up examination of Comet 67P/Churyumov–Gerasimenko by the European Space Agency’s Rosetta spacecraft, for example, revealed a different kind of water ice than what is found on Earth.
That said, we’ve spotted water ice all over the solar system. It’s in permanently shadowed craters on Mercury and the moon, although we don’t know if there’s enough to support colonies in those places. Mars also has ice at its poles, in frost and likely below the surface dust. Even smaller bodies in the solar system have ice – Jupiter’s moon Europa, Saturn’s moon Enceladus, and the dwarf planet Ceres, among others.

7. Spacecraft have visited every planet 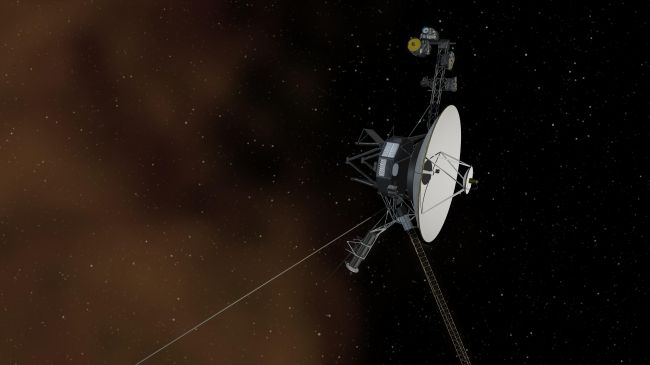 NASA
We’ve been exploring space for more than 60 years, and have been lucky enough to get close-up pictures of dozens of celestial objects. Most notably, we’ve sent spacecraft to all of the planets in our solar system — Mercury, Venus, Earth, Mars, Jupiter, Saturn, Uranus and Neptune — as well as two dwarf planets, Pluto and Ceres.
The bulk of the flybys came from NASA’s twin Voyager spacecraft, which left Earth in 1977 and are still transmitting data from beyond the solar system in interstellar space. Between them, the Voyagers clocked visits to Jupiter, Saturn, Uranus and Neptune, thanks to an opportune alignment of the outer planets.

8. There could be life in the solar system, somewhere 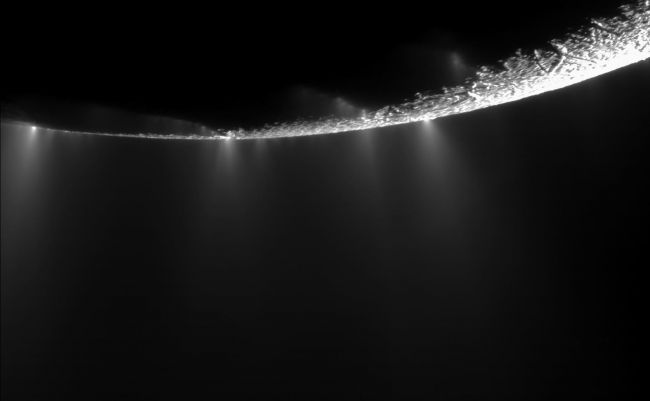 So far, scientists have found no evidence that life exists elsewhere in the solar system. But as we learn more about how “extreme” microbes live in underwater volcanic vents or in frozen environments, more possibilities open up for where they could live on other planets. These aren’t the aliens people once feared lived on Mars, but microbial life in the solar system is a possibility.
Microbial life is now considered so likely on Mars that scientists take special precautions to sterilize spacecraft before sending them over there. That’s not the only place, though. With several icy moons scattered around the solar system, it’s possible there are microbes somewhere in the oceans of Jupiter’s Europa, or perhaps underneath the ice at Saturn’s Enceladus, among other locations. 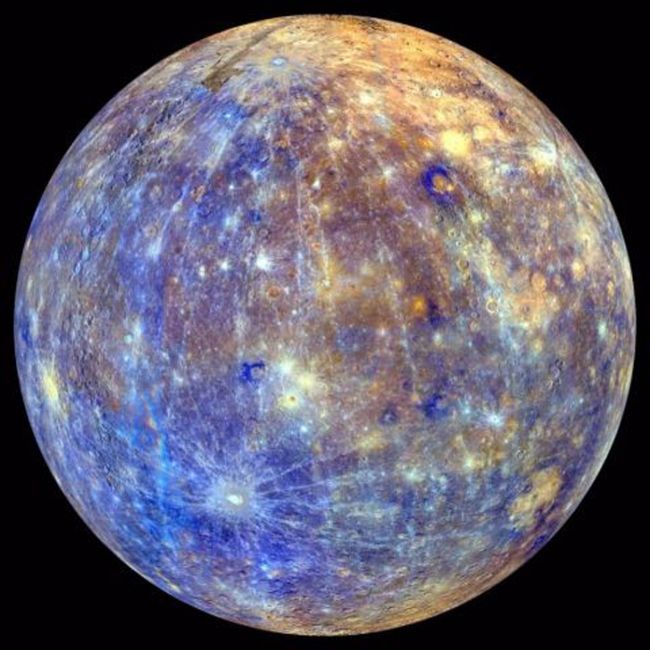 NASA/JHUAPL/Carnegie Institution of Washington/DLR/Smithsonian Institution
For many years, scientists believed that Earth was the only tectonically active planet in the solar system. That changed after the Mercury Surface, Space Environment, Geochemistry and Ranging (MESSENGER) spacecraft did the first orbital mission at Mercury, mapping the entire planet in high definition and getting a look at the features on its surface.
In 2016, data from MESSENGER (which had crashed into Mercury as planned in April 2015) revealed cliff-like landforms known as fault scarps. Because the fault scarps are relatively small, scientists are sure that they weren’t created that long ago and that the planet is still contracting 4.5 billion years after the solar system was formed.

10. There are mountains on Pluto 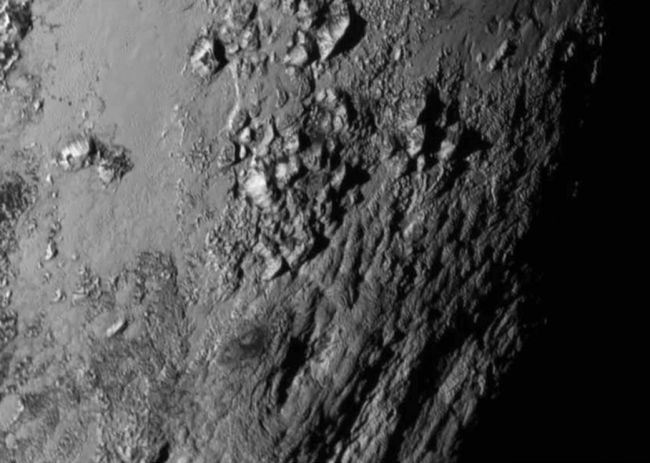 NASA-JHUAPL-SwRI
Pluto is a tiny world at the edge of the solar system, so at first it was thought that the dwarf planet would have a fairly uniform environment. That changed when NASA’s New Horizons spacecraft flew by there in 2015, sending back pictures that altered our view of Pluto forever.
Among the astounding discoveries were icy mountains that are 11,000 feet (3,300 meters) high, indicating that Pluto must have been geologically active as little as 100 million years ago. But geological activity requires energy, and the source of that energy inside Pluto is a mystery. The sun is too far away from Pluto to generate enough heat for geological activity, and there are no large planets nearby that could have caused such disruption with gravity.
NEXT20 Interesting Facts about Aliens