Skip to content
by AdminPosted on1st April 201925th June 2019
In this list, we will highlight some of the worst and notorious computer viruses that have caused a lot of damage in real life. And since people usually equate general malware like worms and trojan horses as viruses, we’re including them as well. These malware have caused tremendous harm, amounting to billions of dollars and disrupting critical real life infrastructure. Here are the 10 most famous and malicious computer viruses.

The ILOVEYOU virus is considered one of the most virulent computer virus ever created and it’s not hard to see why. The virus managed to wreck havoc on computer systems all over the world, causing damages totaling in at an estimate of $10 billion. 10% of the world’s Internet-connected computers were believed to have been infected. It was so bad that governments and large corporations took their mailing system offline to prevent infection. 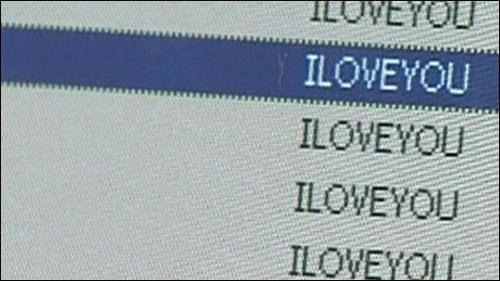 via BBC
The virus was created by two Filipino programers, Reonel Ramones and Onel de Guzman. What it did was use social engineering to get people to click on the attachment; in this case, a love confession. The attachment was actually a script that poses as a TXT file, due to Windows at the time hiding the actual extension of the file. Once clicked, it will send itself to everyone in the user’s mailing list and proceed to overwrite files with itself, making the computer unbootable. The two were never charged, as there were no laws about malware. This led to the enactment of the E-Commerce Law to address the problem.
2. Code Red
Code Red first surfaced on 2001 and was discovered by two eEye Digital Security employees. It was named Code Red because the the pair were drinking Code Red Mountain Dew at the time of discovery. The worm targeted computers with Microsoft IIS web server installed, exploiting a buffer overflow problem in the system. It leaves very little trace on the hard disk as it is able to run entirely on memory, with a size of 3,569 bytes. Once infected, it will proceed to make a hundred copies of itself but due to a bug in the programming, it will duplicate even more and ends up eating a lot of the systems resources. 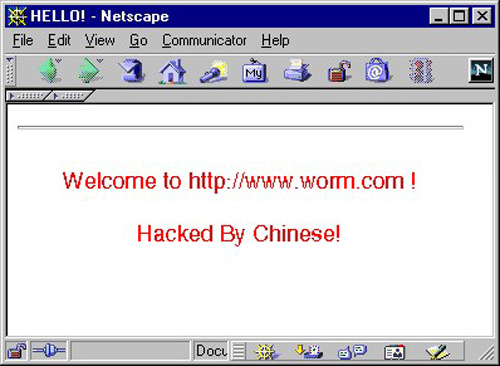 via F-Secure
It will then launch a denial of service attack on several IP address, famous among them the website of the White House. It also allows backdoor access to the server, allowing for remote access to the machine. The most memorable symptom is the message it leaves behind on affected web pages, “Hacked By Chinese!”, which has become a meme itself. A patch was later released and it was estimate that it caused $2 billion in lost productivity. A total of 1-2 million servers were affected, which is amazing when you consider there were 6 million IIS servers at the time.

Named after an exotic dancer from Florida, it was created by David L. Smith in 1999. It started as an infected Word document that was posted up on the alt.sex usenet group, claiming to be a list of passwords for pornographic sites. This got people curious and when it was downloaded and opened, it would trigger the macro inside and unleash its payload. The virus will mail itself to the top 50 people in the user’s email address book and this caused an increase of email traffic, disrupting the email services of governments and corporations. It also sometimes corrupted documents by inserting a Simpsons reference into them. 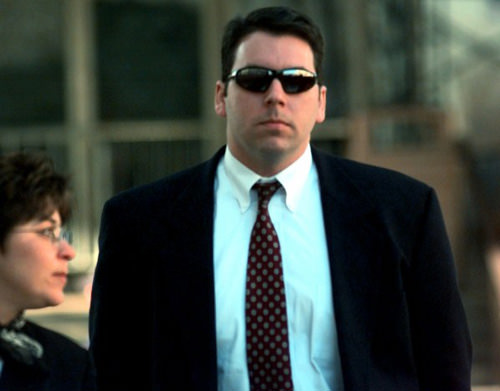 via MSN Canada
Smith was eventually caught when they traced the Word document to him. The file was uploaded using a stolen AOL account and with their help, law enforcement was able to arrest him less than a week since the outbreak began.He cooperated with the FBI in capturing other virus creators, famous among them the creator of the Anna Kournikova virus. For his cooperation, he served only 20 months and paid a fine of $5000 of his 10 year sentence. The virus reportedly caused $80 million in damages.

A Windows worm first discovered in 2004, it was created by computer science student Sven Jaschan, who also created the Netsky worm. While the payload itself may be seen as simply annoying (it slows down and crashes the computer, while making it hard to reset without cutting the power), the effects were incredibly disruptive, with millions of computers being infected, and important, critical infrastructure affected. The worm took advantage of a buffer overflow vulnerability in Local Security Authority Subsystem Service (LSASS), which controls the security policy of local accounts causing crashes to the computer. It will also use the system resources to propagate itself to other machines through the Internet and infect others automatically. 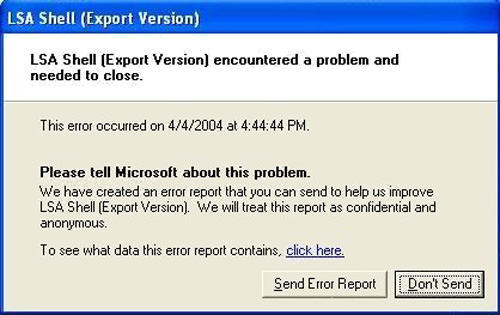 via HP
The effects of the virus were widespread as while the exploit was already patched, many computers haven’t updated. This led to more than a million infections, taking out critical infrastructures,  airlines, news agencies, public transportation, hospitals, public transport, etc. Overall, the damage was estimated to have cost $18 billion. Jaschen was tried as a minor and received a 21 month suspended sentence.

Zeus is a Trojan horse made to infect Windows computers so that it will perform various criminal tasks. The most common of these tasks are usually man-in-the-browser keylogging and form grabbing. The majority of computers were infected either through drive-by downloads or phishing scams. First identified in 2009, it managed to compromise thousands of FTP accounts and computers from large multinational corporations and banks such as Amazon, Oracle, Bank of America, Cisco, etc. Controllers of the Zeus botnet used it to steal the login credentials of social network, email and banking accounts. 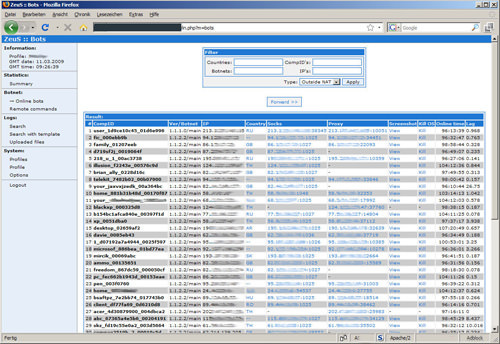 via Abuse.ch
In the US alone, it was estimated that more than 1 million computers were infected, with 25% in the US. The entire operation was sophisticated, involving people from around the world to act as money mules to smuggle and transfer cash to the ringleaders in Eastern Europe. About $70 million were stolen and in possession of the ring. 100 people were arrested in connection of the operation. In late 2010, the creator of Zeus announced his retirement but many experts believe this to be false.

Also known as Downup or Downadup, Conficker is a worm of unknown authorship for Windows that made its first appearance in 2008. The name comes form the English word, configure and a German pejorative.It infects computers using flaws in the OS to create a botnet. The malware was able to infect more than 9 millions computers all around the world, affecting governments, businesses and individuals. It was one of the largest known worm infections to ever surface causing an estimate damage of $9 billion. 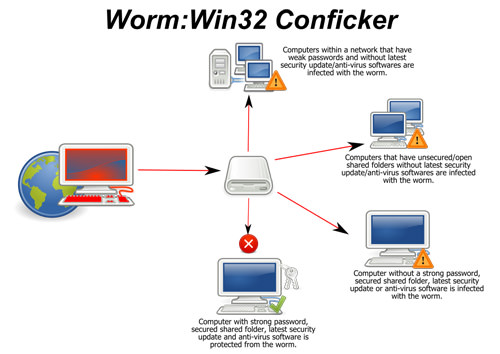 via Wikipedia
The worm works by exploiting a network service vulnerability that was present and unpatched in Windows. Once infected, the worm will then reset account lockout policies, block access to Windows update and antivirus sites, turn off certain services and lock out user accounts among many. Then, it proceeds to install software that will turn the computer into a botnet slaveand scareware to scam money off the user. Microsoft later provided a fix and patch with many antivirus vendors providing updates to their definitions.

Believed to have been created by the Israeli Defence Force together with the American Government, Stuxnet is an example of a virus created for the purpose of cyberwarfare, as it was intended to disrupt the nuclear efforts of the Iranians. It was estimated that Stuxnet has managed to ruin one fifth of Iran’s nuclear centrifuges and that nearly 60% of infections were concentrated in Iran. 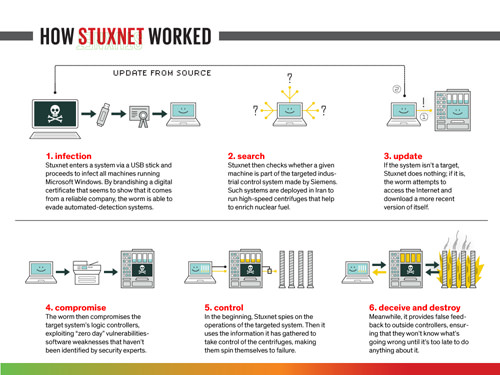 via IEEE
The computer worm was designed to attack industrial Programmable Logic Controllers (PLC), which allows for automation of processes in machinery. It specifically aimed at those created by Siemens and was spread through infected USB drives. If the infected computer didn’t contain Siemens software, it would lay dormant and infect others in a limited fashion as to not give itself away. If the software is there, it will then proceed to alter the speed of the machinery, causing it to tear apart. Siemens eventually found a way to remove the malware from their software.

Surfacing in 2004, Mydoom was a worm for Windows that became one of the fastest spreading email worm since ILOVEYOU. The author is unknown and it is believed that the creator was paid to create it since it contains the text message, “andy; I’m just doing my job, nothing personal, sorry,”. It was named by McAfee employee Craig Schmugar, one of the people who had originally discovered it. ‘mydom’ was a line of text in the program’s code (my domain) and sensing this was going to be big, added ‘doom’ into it. 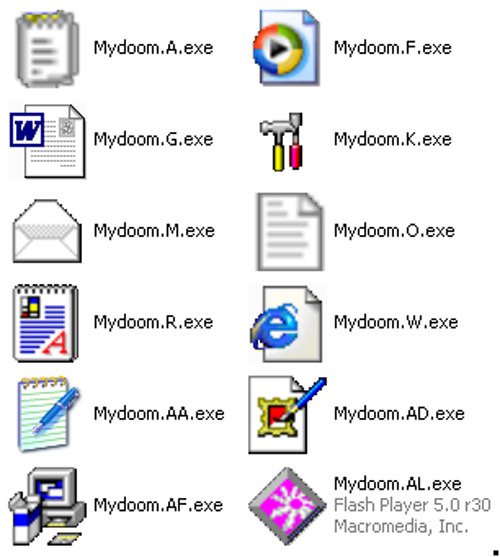 via Virus.Wikidot.com
The worm spreads itself by appearing as an email transmission error and contains an attachment of itself. Once executed, it will send itself to email addresses that are in a user’s address book and copies itself to any P2P program’s folder to propagate itself through that network. The payload itself is twofold: first it opens up a backdoor to allow remote access and second it launches a denial of service attack on the controversial SCO Group. It was believed that the worm was created to disrupt SCO due to conflict over ownership of some Linux code. It caused an estimate of $38.5 billion in damages and the worm is still active in some form today.

CryptoLocker is a form of Trojan horse ransomware targeted at computers running Windows. It uses several methods to spread itself, such as email, and once a computer is infected, it will proceed to encrypt certain files on the hard drive and any mounted storage connected to it with RSA public key cryptography. While it is easy enough to remove the malware from the computer, the files will still remain encrypted. The only way to unlock the files is to pay a ransom by a deadline. If the deadline is not met, the ransom will increase significantly or the decryption keys deleted. The ransom usually amount to $400 in prepaid cash or bitcoin. 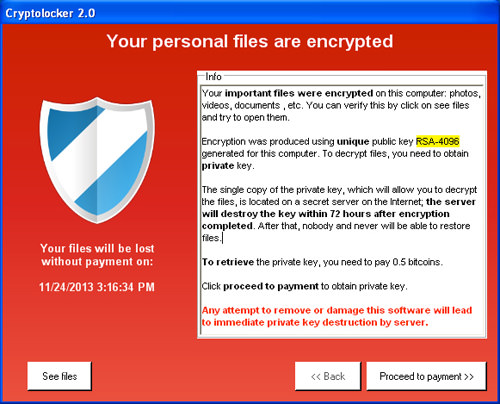 via Bleepingcomputer.com
The ransom operation was eventually stopped when law enforcement agencies and security companies managed to take control part of the botnet operating CryptoLocker and Zeus. Evgeniy Bogachev, the ring leader, was charged and the encryption keys were released to the affected computers. From data collected from the raid, the number of infections is estimated to be 500,000, with the number of those who paid the ransom to be at 1.3%, amounting to $3 million.

Though not as damaging as the rest of the malware on this list, this is one of the few Mac malware to have gain notoriety as it showed that Macs are not immune. The Trojan was first discovered in 2011 by antivirus company Intego as a fake Flash install. In its newer incarnation, a user simply needs to have Java enabled (which is likely the majority of us). It propagates itself by using compromised websites containing JavaScript code that will download the payload. Once installed, the Mac becomes part of a botnet of other infected Macs. 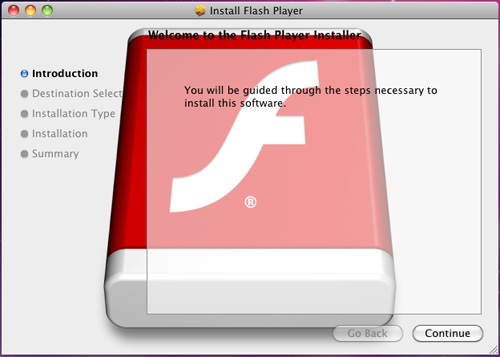 via CNET
The good news is that if it is infected, it is simply localized to that specific user’s account. The bad news is that more than 600,000 Macs were infected, including 274 Macs in the Cupertino area, the headquarters of Apple. Oracle published a fix for the exploit with Apple releasing an update to remove Flashback from people’s Mac. It is still out in the wild, with an estimate of 22,000 Macs still infected as of 2014.
PREVIOUSInteresting Facts About Artificial Intelligence That Will Surprise You
NEXTTop 10 Programming Languages of the World