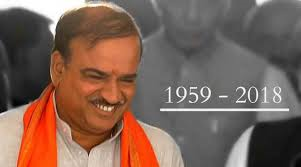 Union Minister and senior BJP leader Ananth Kumar died at a hospital in Bengaluru this morning. He was 59. Ananth Kumar was suffering from cancer and had returned from the US last month after treatment in New York.
The minister’s wife Tejaswini and two daughters were with him in his last moments. His body will be kept at National College grounds in Bengaluru for last respects.
The national flag will fly at half mast across the country as a mark of respect to the union minister. Karnataka has announced three-day state mourning and all schools, colleges and offices are closed today.
Ananth Kumar was one of the few ministers to have also served in the earlier BJP-led government led by Atal Bihari Vajpayee. In fact, he was the youngest minister in the Atal Bihari Vajpayee’s cabinet in 1998 and was minister for Civil Aviation, Tourism, Sports, Urban Development and Poverty Alleviation.
The six-time MP from Karnataka was the first person to speak in Kannada in the United Nations.
Prime Minister Narendra Modi described him as a remarkable leader, an able administrator and a great asset to the BJP.
A graduate in Arts and Law, Mr Kumar was associated with the Akhila Bharatiya Vidyarthi Parishad (ABVP), a student organisation of the Rashtriya Swayamsevak Sangh (RSS), before joining the BJP in 1987.
As a student activist, he was also jailed along with other ABVP leaders during the Emergency of 1975.
He was elected to the Lok Sabha in 1996. In 1998, he became the youngest member of the Vajpayee cabinet and he returned as minister in 1999.
In 2003, he became the BJP’s Karnataka chief. The party won the highest number of seats in the assembly and the Lok Sabha under his stewardship.
The parliamentarian from south Bengaluru constituency held charge of two ministries in the Narendra Modi government — Chemicals and Fertilisers since May 2014 and Parliamentary Affairs since July 2016.
PREVIOUSPM Modi inaugurates Sikkim’s first airport, India’s 100th
NEXTCBSE Exam Date Sheet 2019 Class 10, Class 12