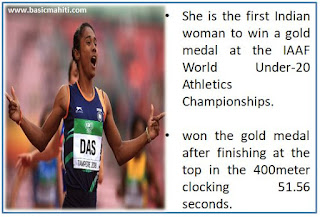 Hima Das was born on 9 January 2000 in Nagaon in the Indian state of Assam. Her parents are Ronjit and Jomali Das, she is the older of three children.
Das started off by playing football with boys in her school days, on the mud pits near her village school. She was considering a career in football and was hoping to play for India.
Later, it was suggested to her that she participate in athletics. Das met Nipon Das (an athletics coach with a Directorate of Sports and Youth Welfare) during an inter-district meet and he soon began coaching her.
Her coach asked her to shift to Guwahati, 140 km from her village, to make a career in athletics. Das’ parents were initially reluctant but were eventually convinced by him.
Her coach arranged for Das to stay in a rented accommodation near the Sarusajai Sports Complex. He inducted her into the state academy, which specialised in boxing and football. A separate wing was started later for athletics.
She is the first Indian woman to win a gold medal at the IAAF World Under-20 Athletics Championships.
She is the first Indian track athlete to win a medal at any global event.
She is inspirational to many youngsters who want to carrier in games.
PREVIOUSRBI Grade B Officers Recruitment 2018 Registration Started Today
NEXTUNESCO declares Indian National Anthem best in the world: True or false?