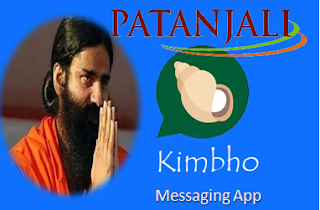 After launching sim cards, Baba Ramdev Ji has launched a new messaging application called Kimbho.
What is About Kimbho?
Kimbho is a real messaging app and empowered private and group chat with free phone and video calling. It has dozens of amazing features to share text, audio, photos, videos, stickers, quickies, location, GIF, doodle and more,” reads its description on Google Play Store.
Patanjali Communication, as mentioned on play store claims that the app is fast and its powered by advance socket technology which ensures instant, real time messaging. Also, every message sent is encrypted by AES.
Kimbho supports ghost chatting, auto delete messages. Apart from this, the Patanjali Communications on Google Play store wrote that Kimbho privacy feature and saves no data of the users on their servers or cloud.
The app can also be personalised by creating themes. Users can pick their favourite wallpaper and get fresh experience every time. The app currently has 1000 plus downloads and is 23 MB in size.
“Desi” messaging application to take on WhatsApp. Named as ‘Kimbho’, the app has been launched under Ramdev’s flagship company Patanjali.
Silent Features of Kimbho App:

·        It send message quick: with Quickies Messaging was never that easy. Send text, voice messages, photos with a single click. Create your own quickies and send to friends whenever you want.
·        Free Voice & Video Calls: Domestic & international voice and video calls with friends anytime, anywhere. Don’t wait to hear your loved ones’ voices or see their smiling faces.
·        Ghost Chat Kimbho supports ghost chatting, auto delete messages, wipe out feature right at your finger tip.
·        Group Messages Start a group conversation and give it a name like “Soccer Team” or “Road Trip”. Easily include who you want, leave the conversation whenever you want, or turn on Do Not Disturb and then read through the messages when you have time.
·        It is Secure Every message is encrypted with AES (Advanced Encryption Standard) technology, which guarantee for complete security.
·        Send anything! Share video and voice messages. Send multiple photos, stickers, GIFs. Write anything with your finger and share. Shake anytime to share your location. Send important links and contacts.
You can download it directly from Google Play Store: Click here

To know about Kimbho Official website: Click here
Woh!!! Now WhatsApp will be given a competition.
Common India Start Using Kimbho. Kimbo is a Alternative for WhatsApp.

Share this news to your friends & relatives…
Latest press update on Kimbho:
On 31st May 2018 Patanjali removed its messaging app ‘Kimbo’ from Google Play Store and Apple’s App Store, a day after the launch saying it was released only for one-day trial.
A company spokesperson said it would launch the app officially soon, once its technical development phase is completed. Yesterday, Patanjali spokesperson has tweeted about the launch of ‘Kimbo’, claiming it to be India’s reply to Facebook-owned Whatsapp.
The company claimed that it placed the new app on Google Play Store and Apple’s App Store only for a day, that too for technical testing.
“We put our trial version of Kimbho app on Google Play Store and Apple Store for trial for a day only and we had witnessed around 1.5 lakh downloads in the first three hours. We thank the people for such encouraging response,” Patanjali spokesperson SK Tijarawala said. The spokesperson said it would be launched soon and that technical work is in progress.
NEXTIncome Tax Informants Reward Scheme, 2018 – Get to a reward of 5 crore rupees by I-T department.