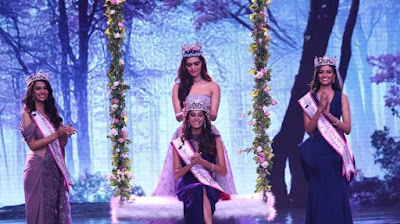 The 55th Femina Miss India World 2018 winner is Anukreethy Vas from Tamil Nadu, while first runner-up is Meenakshi Chaudhary from Haryana and second Shreya Rao from Andhra Pradesh.
Miss World 2017 Manushi Chhillar crowned her successor Anukreethy at the star-studded grand finale on Tuesday night in Mumbai at the Sardar Vallabhbhai Patel Indoor Stadium.
Ninteen-year-old Anukreethy is a student of Chennai’s Loyola College, pursuing B.A. in French to become an interpreter. Raised by a single mother, the just-crowned Miss India World 2018 wishes to become a supermodel as she loves facing the camera.
She is fulfilling her mothers dream by pursuing BA in French to become a translator.

She completed her schooling from RSK Higher Secondary School. Anukreethy loves to sing and dance, and is also a state level athlete. Her interests also include riding bikes.

Anukreethy wants to become a supermodel, and is a fan of ace photographer, Atul Kasbekar.
The young starlet has always believed, “The best preparation for tomorrow is doing your best today. So be the best version of yourself everyday.”
This is the attitude that helped the 19-yer-old beat 30 contestants from across India to to be crowned Miss India 2018 at Dome, NSCI SVP Stadium, Mumbai.
Miss India Haryana Meenakshi Chaudhary and Miss India Andhra Pradesh Shreya Rao Kamavarapu became the first and second runner-up respectively.