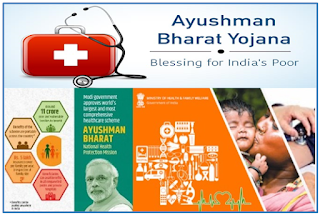 Prime Minister Narendra Modi launched Centre’s flagship Ayushman Bharat-National Health Protection Mission (AB-NHPM) from Ranchi on Sunday, reported news agency Press Trust of India (PTI). However, the scheme will now become operational from September 25 on the birth anniversary of Pandit Deendayal Upadhyay.
The ambitious Ayushman Bharat scheme, renamed the Pradhan Mantri Jan Arogya Abhiyan (PMJAY) aims to provide coverage of Rs. 5 lakh per family annually, benefiting more than 10 crore poor families, according to a release issued by PIB (Press Information Bureau).
1.   The Ayushman Bharat scheme will target poor, deprived rural families and identified occupational category of urban workers’ families, 8.03 crore in rural and 2.33 crore in urban areas, as per the latest SECC (Socio Economic Caste Census) data.
2.   This cover will take care of almost all secondary care and most of tertiary care procedures.
3.   There will be no restriction on family size, age and gender under ‘Ayushman Bharat’ scheme to ensure that nobody is left out (especially women, children and elderly), the PIB release added.
4.   A beneficiary covered under the scheme will be allowed to take cashless benefits from any public/private empanelled hospitals across the country.
5.    The benefit cover will also include pre and post-hospitalisation expenses.
6.    All pre-existing conditions will be covered from day one of the policy.
7.    A defined transport allowance per hospitalization will also be paid to the beneficiary, the PIB release said.
8.    Eligible people will be able to avail the benefits in government and listed private hospital.
9.    The Ayushman Bharat scheme will be funded with 60 per cent contribution coming from the Centre and remaining from the states.
10. Over 8,735 hospitals, both public and private, have been empanelled for the scheme, and as many as 31 states and union territories have signed MoUs with the Centre to implement the programme, a PTI report said.