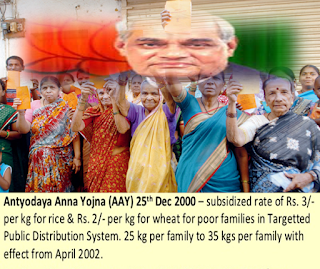 Antyodaya Anna Yojana(AAY)  Is a Government of India sponsored scheme to provide highly subsidised food to millions of the poorest families. It was launched by the [NDA] government on 25 December 2000 and first implemented in the Indian state of Rajasthan
After identifying the “poorest of the poor” through extensive surveying, the government began providing them an opportunity to purchase up to 35 kilograms of rice and wheat at a highly subsidized cost of three rupees per kilogram of rice and two rupees per kilogram of wheat.
Poor families were identified by their respective state rural development facilities through use of surveys. The scheme has been expanded twice, once in June 2003 and then in August 2004, adding an additional 5,000,000 Below Poverty Line(BPL) families each time and bringing the total number of families covered up to 20,000,000.
Purpose of Antyodaya Anna Yojana:
·        Giving food to the poor.
·    Family of widows or sick person/ handicap/ persons 60 years of age or older who have no assured means of subsistence or social assistance.
·        Providing wheat and rice to the poor as per family members.
·        Under this scheme, grains of 3 rupees and 2 rupees per kg will be given.
·        Providing 35 kg of rice/ wheat per month to the maximum of every family.
·        These plans are for BPL only.
·        To take advantage of this scheme, grains from Bio-Metric will be given.
Once a family has been recognized as eligible for the AAY, they are to be given a unique “Antyodaya Ration Card.” This card, also called the PDS yellow card, acts as a form of identification, proving that the bearer is authorized to receive the level of rations the card describes. The color of the card is green.