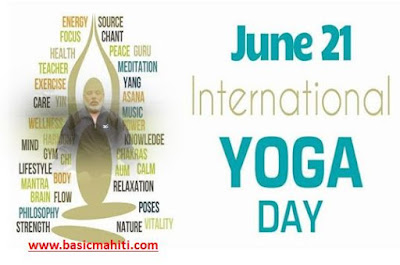 WORLD TAKES TO THE MAT

Countries across the globe are gearing up to celebrate this year’s UN International Day of Yoga.
International Day of Yoga, or commonly and unofficially referred to as Yoga Day, is celebrated annually on 21 June since its inception in 2015. An international day for yoga was declared unanimously by the United Nations General Assembly (UNGA). Yoga is a physical, mental and spiritual practice attributed mostly to India. The Indian Prime Minister Shri Narendra Modi in his UN address suggested the date of 21 June, as it is the longest day of the year in the Northern Hemisphere and shares special significance in many parts of the world.
The United Nations has declared June 21 as the International Day of Yoga in 2014.
The idea of International Day of Yoga was first proposed by the current Prime Minister of India, Mr. Narendra Modi during his speech at the UNGA, on 27 September 2014.
He stated: Yoga is an invaluable gift of India’s ancient tradition. It embodies unity of mind and body; thought and action; restraint and fulfilment; harmony between man and nature; a holistic approach to health and well-being. It is not about exercise but to discover the sense of oneness with yourself, the world and the nature. By changing our lifestyle and creating consciousness, it can help in well-being. Let us work towards adopting an International Yoga Day. – Narendra Modi, UN General Assembly
UN Declaration
On 11 December 2014, India’s Permanent Representative Asoke Mukherji introduced the draft resolution in UNGA. The draft text received broad support from 177 Member States who sponsored the text, which was adopted without a vote. This initiative found support from many global leaders. A total of 177 nations co-sponsored the resolution, which is the highest number of co-sponsors ever for any UNGA resolution of such nature.
When proposing 21 June as the date, Modi said that the date was the longest day of the year in the northern hemisphere (shortest in the southern hemisphere), having special significance in many parts of the world. From the perspective of yoga, the summer solstice marks the transition to Dakshinayana. The first full moon after summer solstice is known as Guru Poornima. Shiva, the first yogi (Adi Yogi), is said to have begun imparting the knowledge of yoga to the rest of mankind on this day, and became the first guru (Adi Guru). Dakshinayana is also considered a time when there is natural support for those pursuing spiritual practices.
Following the adoption of the UN resolution, several leaders of the spiritual movement in India voiced their support for the initiative. The founder of Isha Foundation, Sadhguru, stated, “This could be a kind of a foundation stone to make scientific approach to the inner well-being of the human being, a worldwide thing… It’s a tremendous step for the world.”
The founder of Art of Living, Ravi Shankar, lauded the efforts of Modi, saying, “It is very difficult for any philosophy, religion or culture to survive without state patronage. Yoga has existed so far almost like an orphan. Now, official recognition by the UN would further spread the benefit of yoga to the entire world.”
What is YOGA?
Yoga is a group of physical, mental, and spiritual practices or disciplines which originated in ancient India. There is a broad variety of yoga schools, practices, and goals in Hinduism, Buddhism, and Jainism.
Among the most well-known types of yoga are Hatha yoga and Raja yoga.
The origins of yoga have been speculated to date back to pre-Vedic Indian traditions; it is mentioned in the Rigveda, but most likely developed around the sixth and fifth centuries BCE, in ancient India’s ascetic and sramana movements.
The chronology of earliest texts describing yoga-practices is unclear, varyingly credited to Upanishads. The Yoga Sutras of Patanjali date from the first half of the 1st millennium CE, but only gained prominence in the West in the 20th century.
Hatha yoga texts emerged around the 11th century with origins in tantra.
Yoga gurus from India later introduced yoga to the West, following the success of Swami Vivekananda in the late 19th and early 20th century. In the 1980s, yoga became popular as a system of physical exercise across the Western world.
Yoga in Indian traditions, however, is more than physical exercise; it has a meditative and spiritual core. One of the six major orthodox schools of Hinduism is also called Yoga, which has its own epistemology and metaphysics, and is closely related to Hindu Samkhya philosophy.
Many studies have tried to determine the effectiveness of yoga as a complementary intervention for cancer, schizophrenia, asthma, and heart disease.
The results of these studies have been mixed and inconclusive. On December 1, 2016, yoga was listed by UNESCO as an Intangible cultural heritage.
·        Yoga is a timeless tradition from Rig Veda with a history of over 5000 years
·        Yoga is an ancient philosophy that educates on health and harmonious living
·        Yoga is a science of self-awareness, self-development and self-transformation
·        Yoga is a holistic discipline that integrates body and mind, creates perfect balance
·        Yoga is not just physical exercise, it builds emotional stability and calms the mind
·        Yoga is a powerful health discipline that heals many health issues without medicine
·        Yoga is a way of life that boosts positive energies and improves quality of life
·        Yoga bestows self-understanding, love, knowledge, wisdom and happiness
·        Yoga awakens the spiritual self, makes the practitioner experience inner divinity
·        Yoga is a natural therapy that makes one look healthy, youthful and beautiful
·        Yoga is an amazing inward journey that illuminates life beyond pain and suffering
·        Yoga, as a disciplined method for attaining a goal;
·        Yoga, as techniques of controlling the body and the mind;
·        Yoga, as a name of one of the schools or systems of philosophy (darsana);
·        Yoga, in connection with other words, such as “hatha-, mantra-, and laya-,” referring to traditions specialising in particular techniques of yoga;
·        Yoga, as the goal of Yoga practice.”

PreviousGoogle has made finding your lost Android smartphone effortless.
NextHow to get the Vehicle Information by Vehicle Number?