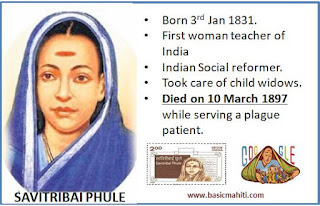 ·        Savitribai Jyotirao Phule was an Indian social reformer, educationalist and poet. She played an important role in improving women’s rights in India during British rule.

·        Savitribai Jyotirao Phule, along with her husband founded the first girls’ school in Pune run by native Indians at Bhide Wada in 1848 And Savitribai was its first teacher.

·        Together with her husband, she taught children from different castes and opened a total of 18 schools.

·        She worked to abolish discrimination and unfair treatment of people based on caste and gender.
·        She is regarded as an important figure of the social reform movement in Maharashtra.
·        The couple also opened a care centre called Balhatya Pratibandhak Griha for pregnant rape victims and helped deliver their children.
·        Savitribai Phule wrote many poems against discrimination and advised people to get educated. Two books of her poems were published posthumously, Kavya Phule (1934) and Bavan Kashi Subodh Ratnakar (1982).
·        Savitribai Phule and her adopted son, Yashwant, opened a clinic to treat those affected by the worldwide Third Pandemic of the bubonic plague when it appeared in the area around Nallasopara in 1897.
·        Savitribai Phule personally took patients to the clinic where her son served them. While caring for the patients, she contracted the disease herself. She died from it on 10 March 1897 while serving a plague patient.
·        Pune City Corporation created a memorial for her in 1983.
·        In 2015, the University of Pune was renamed as Savitribai Phule Pune University in her honour.
·        On 10 March 1998 a stamp was released by India Post in honour of Phule.
·        On 3 January 2017, the search engine Google marked the 186th anniversary of the birth of Savitribai Phule with a Google doodle.

PreviousKnow about Friendship day
NextFacebook Dating Is Rolling Out, here is how to find love of your life