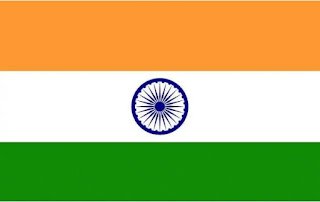 The National flag of India is rectangular in shape and consists of three colors – saffron, white and green. The present form of the flag was adopted by the Constituent Assembly of India on 22 July, 1947 – 24 days prior to the formal declaration of Independence.
It was designed by Shri Pingali Venkayya and had the saffron, white and green stripes with the spinning wheel placed in the white section. It was hoisted on April 13, 1923 in Nagpur during an event commemorating the Jallianwallah Bagh Massacre.
It was named the Swaraj Flag and became the symbol of India’s demand for Self-rule led by the Indian National Congress.
The resolution to adopt the tricolor as the National Flag of India was passed in 1931. On July 22, 1947, the Constituent Assembly of India adopted the Swaraj Flag as the National Flag of Sovereign India with the Ashok Chakra replacing the spinning wheel.
Design
The rectangular tricolor flag consists of three equal horizontal segments, with saffron on top, white in the middle and green at the bottom. At the center of the white stripe is a depiction of Ashok Chakra in navy blue.
It is round hollow wheel and has 24 spokes radiating from the center.
The dimension of the flag should be of 2:3 ratio, i.e. the length should be 1.5 times the breadth. The flag is to be made from Khadi, hand-woven cotton or silk, following the manufacturing protocols laid out by the Bureau of Indian Standards (BIS).
The Khadi Development and Village Industries Commission hold the right to manufacture the Indian National flag and as of 2009.
The responsibility lies with the Karnataka Khadi Gramodyoga Samyukta Sangha (KKGSS) is a manufacturing federation located in the Bengeri area of the city of Hubli in the Karnataka, state of India and It is the only unit in India that is authorized to manufacture and supply the Flag of India.
Protocols for Displaying the Indian National Flag
The Flag Code India (2002), Prevention of Improper Use of Emblems and Names Act (1950), and the Prevention of Insults to National Honor Act (1971) govern the display, representation and handling of the Indian National Flag.
The Do’s and Don’ts of handling the Indian National Flag are as follows:
Significance of the National Flag
The National Flag of India represents the concept of secularism that the country was built upon. The austerity of the rectangular tricolor underlines the rich spiritual and philosophical history of India.
The basis of the flag is the Swaraj Flag, adopted by the Indian National Congress during the Indian Freedom Struggle movement under Gandhi and is reminiscent of the same.
Key Notes
Title: Tricolour / Tiranga
Colors: Saffron, White and Green; Navy Blue in the Ashok Chakra
Dimension ratio: 2:3
Material: Khadi Cotton or Silk
Adopted on: July 22, 1947
Designed by: Pingali Venkayya
Manufacturing: The responsibility lies with the Karnataka Khadi Gramodyoga Samyukta Sangha (KKGSS). It is the only unit in India that is authorized to manufacture and supply the National Flag of India.
Feel Proud to Share our National Flag of India
JAI HIND
PreviousGoogle Launched The new website testing tool – testmysite.thinkwithgoogle.com
NextAn Important message to all parents of school going childrens