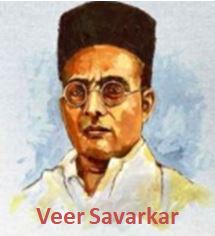 Vinayak Damodar Savarkar was born on 28 May 1883 in Bhagur, Maharashtra, India & died on 26 February 1966 in Mumbai, India.
Vinayak was born in the family of Damodar and Radhabai Savarkar in the village of Bhagur, near the city of Nasik, Maharashtra. He had three other siblings namely Ganesh, Narayan, and a sister named Mainabai.

He remains largely unknown to the masses because of the vicious propaganda against him and misunderstanding around him that has been created over several decades. This website attempts to bring the life, thought, actions and relevance of Savarkar before a global audience.

Savarkar’s revolutionary activities began when studying in India and England, where he was associated with the India House and founded student societies including Abhinav Bharat Society and the Free India Society, as well as publications espousing the cause of complete Indian independence by revolutionary means.

The airport at Port Blair, Andaman and Nicobar‘s capital; has been named Veer Savarkar International Airport.
The commemorative blue plaqueon India House fixed by the Historic Building and Monuments Commission for England reads “Vinayak Damodar Savarkar 1883-1966 Indian patriot and philosopher lived here”.
In the recent past, the Shiv Sena political party has demanded that the Indian Government posthumously confer upon him India’s highest civilian award, the Bharat Ratna.
Savarkar published The Indian War of Independence about the Indian rebellion of 1857 that was banned by British authorities.

He was arrested in 1910 for his connections with the revolutionary group India House.

Following a failed attempt to escape while being transported from Marseilles, Savarkar was sentenced to two life terms amounting to 50 years’ imprisonment and moved to the Cellular Jail in the Andaman and Nicobar Islands.
While in jail, Savarkar wrote the work describing Hindutva, openly espousing Hindu nationalism. He was released in 1921 under restrictions after signing a plea for clemency in which he renounced revolutionary activities.
Travelling widely, Savarkar became a forceful orator and writer, advocating Hindu political and social unity. Serving as the president of the Hindu Mahasabha, Savarkar endorsed the ideal of India as a Hindu Rashtra and opposed the Quit India struggle in 1942, calling it a “Quit India but keep your army” movement.
He became a fierce critic of the Indian National Congress and its acceptance of India’s partition, and was one of those accused in the assassination of Indian leader MahatmaMohandas Karamchand Gandhi.
He was blameless as the charges could not be proven.
·        The first political leader to daringly set Absolute Political Independence as India’s goal (1900).
·        The first Indian political leader to daringly perform a bonfire of foreign (English) clothes (1905).
·        The first Indian to organize a revolutionary movement for India’s Independence on an international level (1906).
·        The first Indian law student who was not called to the English Bar despite having passed his examination and observed the necessary formalities, for his activities to seek India’s freedom from the British (1909).
·        The first Indian historian whose book on the 1857 War of Independence was proscribed by British Authorities in India even before its publication. The Governor General had asked the Postmaster General to confiscate copies of the book six months before the book were officially banned (1909).
·        The first political prisoner whose daring escape and arrest on French soil became a cause celebre in the International Court of Justice at The Hague. This case was mentioned in many International Treaties at that time (1910).
·        The first graduate whose degree was withdrawn by an Indian University for striving for India’s freedom (1911).
·        The first poet in the world who, deprived of pen and paper, composed his poems and then wrote them on the prison walls with thorns and nails, memorized ten thousand lines of his poetry for years and later transmitted them to India through his fellow-prisoners who also memorized these lines.
·        The first revolutionary leader who within less than 10 years gave a death-blow to the practice of un-touch-ability in the remote district of Ratnagiri while being interned there.
·        The first Indian leader who successfully started – A Ganeshotsava opens to all (1930).
·        The first Indian leader who successfully started – “Patitpavan Mandir“, open to all (22 February 1931).
·        A cafe open to all Hindus including ex-untouchables (01 May 1933).
·        The first political prisoner in the world who was sentenced to Transportation for Life twice, a sentence unparalleled in the history of the British Empire.
·        The first political leader to embrace death voluntarily by way of Atma Samarpan in the highest tradition of Yoga (1966).
Many films are made and books wrote on legend Savarkar. We must salute such great leader; being Indian we should study & understand their life. They dedicated there whole life for freedom, I feels proud while reading about our freedom fighters their footprints.