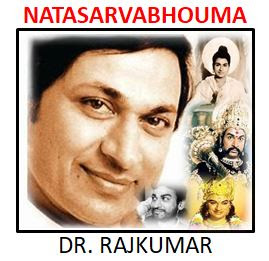 Dr. Rajkumar (ಡಾ. ರಾಜಕುಮಾರ್)was born on 24th-April-1929in Gajanur, a small village (now in Tamil Nadu). His official name was Singanalluru Puttaswamayya Muthurajuand only came to be known as Rajkumar (which means prince) after joining films.
His father, Puttuswami, was a famous Kannada dramatist. Dr Rajkumar was married to Parvathamma and had 5 children.
He has three sons, Shiva Rajkumar, Ragavendra Rajkumar and Punith Rajkumar (Appu), and two daughters, Lakshmi and Poornima.
His primary view about his fans was “I don’t know whether I will ever see God. But for me all those who are assembled here are my Gods.
Dr. Rajkumar earned title “Natasarvabhouma” (meaning emperor of acting) retained popularity in both Karnataka and other Indian states.
Most of Dr. Rajkumar movies were epic films in Kannada film industry.
Dr. Rajkumar Popularly known as Annavaru (Kannada: ಅಣ್ಣಾವ್ರು, Big Brother), Dr Rajkumar is a legend in the history of Kannada Cinema. His career spanned across 5 decades in which he had acted in more than 200 movies.
He was also a well-known singer, as a playback singer as well as of devotional songs. His voice is referred as kogile kanta (the voice of a Koel)
His acting skills earned him numerous awards, which included the Padma Bhushan, Dada Saheb Phalke Award, Karnataka RatnaAward, and National Award.
Awards were for namesake to the Veteran actor such as Dr. Rajkumar, which just increase the respect of the award and not the person. Major south Indian stars like M. G. Ramachandran, Rajanikant, Kamal Hasan were the ardent fan of him.
Dr. Rajkumar started his career as a theatre artist with his father in a troupe led by the legendary Gubbi Veeranna. It was here that Rajkumar honed his acting and singing skills.
Bedara Kannappa, a 1954 Kannada language movie, marked his entry into the film world. This movie was directed by H L N Simha who also christened him Rajkumar.
Rajkumar would use the same name for the rest of his life. He later forayed into film production with the hugely popular Ranadheera Kanteeravawhich he produced with another legend of Kannada cinema, Balakrishna. This movie which was made exclusively with technicians from Karnataka also marked the beginning of full-fledged film making in Karnataka.
Dr. Rajkumar was also well-known as a singer. He is the only actor in India, who received a national award for the singing. Award was given to him for the song “Naadamaya” for the film “Jeevana Chaitra”.
He used to call PBS ‘Shaareera’ while he referred to himself as ‘Shareera’. Raj had a good voice and all his songs are popular. He had most all type of songs classical, romantic, and devotional.
Although his singing was greatly appreciated, his fans of the days of black-and-white movies in the 1960s and 1970s, swear by the fact that his true identity was P B Srinivas, who did the playback singing for most of Rajkumar’s movies, until Rajkumar himself started to sing. PBS continued singing for him in many of the movies in which Rajkumar starred in double/triple roles. A noteworthy example is the movie Babruvahana in which Rajkumar plays both Arjuna and Babruvahana wherein PBS sang for Arjuna while Rajkumar sang for Babruvahana.

Dr Rajkumar is idolized by millions of fans even today.he is the only Actor to have around 5000 fans Association across the world.

Dr. Rajkumar was also one of the most versatile actors in Indian cinema.
One of his most famous songs is “Huttidare Kannada naadalli hutta beku” movie called Akshmika.
His character depictions ranged from comedy to action, from lover to double/triple roles, from mythological characters to portrayal of modern day social causes.
He acted with many directors of the south Indian cinema from B.R. Pantulu, Puttanna Kanagal to Shankar Nag and Nagabharana.
With the exception of one Telugu movie called “Kalahasti Mahathyam” he acted only in Kannada movies.

He owned a film production company called Vajreshwari Production, which produced films under the banner of Dakshayani Combines.
He participated in several protest marches such as “Gokak Chaluvali” for the welfare of Kannada and Karnataka.
Whenever there is a threat to the sovereignty of the culture and people of Kannada, he always took the leadership. That’s why still people of Kannada resembles him as their own brother and always keeps him in their heart.
He never smoked a cigar/cigarette or acted as an alcoholic in any of his movies (excepting a few in the early days of his career). In real life too, he was a non-smoker and non-alcoholic and maintained a very high standard of living, performing daily Yogasanas and following a strict diet.
Though he had numerous chances to try his hand at Indian politics owing to his mass following, he refrained himself from entering active politics focusing his energy solely towards art and cinema.

The Success Rate of Dr. Rajkumar Movies is 95%, highest ever than any other actor in the Indian Film Industry and only Kannada Actor ever to Act in 14 Films in a single year twice, once in 1964 & other in 1968.

Dr. Rajkumar last movie was Shabdhavedi.
Kidnapped by Veerappan
30th Jul, 2000, at the age of 72, Rajkumar, his son-in-law Govindaraju and two others were kidnapped from the actor’s palatial house at Gajanur in Tamil Nadu by the bandit Veerappan.
Veerappan was demanding the release of his gang members who were being held in jail under a defunct anti-terrorism law. The event prompted a massive manhunt and threw the Karnataka government into crisis.
Dr. Rajkumar was released unharmed on 15th Nov, 2000, after 108 days of captivity.
His kidnapping and the manner in which his release were secured are a mystery to this day.
Death and aftermath
Dr. Rajkumar died at his home in Sadashivanagar, Bangalore, on April 12, 2006 (1.45 IST) following a cardiac arrest.
He had a history of heart-related problems and had been admitted to Wockhardt Hospital for treatment of unstable angina.
His health had been a concern after the kidnapping and since the death of his brother S.P. Varadaraju.
Memorial
There is memorial in the memory of Dr. Rajkumar at Kanteerava studios, Bengaluru.
The memorial is built using Marble stones. On his Birthday, every year 24th April, it was like a festival in this place, fans came here to celebrate Rajanna’s Brother (Dr. Raj Kumar) birthday
Rajkumar received numerous State, National and international awards.
·       He received an honorary doctorate from Mysore University in 1976.
·       He won 10 Filmfare awards for the best actor category — the second highest in the history of Indian films.
·       He won nine state awards in the best actor category. (State awards for films were started by the Karnataka government in 1967 when Rajkumar’s career was half over. But still he managed to win the most awards in the Kannada film industry.)
·       He won a National Film Award for Best Male Playback Singer in 1993 for “Naadamaya ee Lokavella” song in Jeevana Chaitra movie.
·       He received the Padma Bhushan award from the Government of India in 1983 and the Dadasaheb Phalke Award in 1995, in recognition of his contributions to the Kannada film industry.
·       He was rewarded Karnataka Ratna in the year 1993 by the Government of Karnataka.
·       In 1985, Rajkumar won the prestigious Kentucky Colonel award presented in Bangalore by the then-governor of Kentucky, U.S.A
·       Karnataka government in 1967 awarded him “Nata Saarvabhowma” (The Emperor of Acting).
·       He received NTR National Award for the year 2002.
PREVIOUSDhirubhai Ambani a Legendary Contributor
NEXTBal Gangadhar Tilak’s Biography