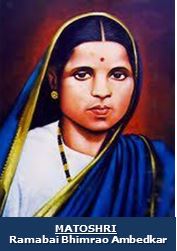 Matoshri Ramabai Bhimrao Ambedkar
(7 February 1898 – 27 May 1935).
It is rightly said, “There is a lady at the back of very successful man”.
It was so in the case of Goswami Tulsidass, Shatrarpati Shiva Ji Maharaj, Tilak, Mahatma Gandhi, Veer Savarkar, Mahatma Jyotiba Phule, Baba Sahib B R Ambedkar and may other personalities, who made history of sorts.

The success of Dr. Ambedkar had countless contribution of his noble wife Smt. Ramabai Ambedkar; she was intelligent, kind, poise, obedient, religious, possessing high character, besides having simplicity of style and taste.

This saintly lady although lived in extreme poverty but without a whisper of complaint on her face and always turning her eyes towards God for the safety and prosperity of her husband.
Early life

She was gentle by temperament, sober in manners, weak in constitution but modest in speech. Revered Ramabai a sober and good girl came of a good but poor family.

She was the second daughter of Bhiku Walandkar, a resident of Walang village near Dapoli in Konkan in central India.

He used to carry fish loads on his head from sea side to the bazaar. His earning was so meagre that he could hardly make both ends meet.
Dapoli is a place where child Bhim was admitted in his first school, when he was 5 years. Old, as his father Subedar Ramji Sakpal had migrated after his retirement.
Ramabai was born in 1898. She has two sisters Gorabai and Meerabai and one brother named Shanker Dhutrey.

Shanker Dhutrey also called Shanker Walangkar worked in a press. These unfortunate children lost first their mother & after some time their father too in childhood so were brought up by their maternal and parental uncle in Bombay (now Mumbai). Bhiva later called Bhimrao Ramji Dass Ambedkar and Ramibhai (later Ramabhai) were married when they were 16 years and 9 years old respectively:

Marriage life:
The marriage was ceremonised shortly after Bhim had passed his matriculation examination. The marriage pandal was an open shed of the Byculla Fish market in Bombay, after the days market was over. At night the bridegroom and his relatives were lodged in one spacious corner of the open shed and that of with her relatives in another corner. The small stone plate forms in the market served as benches, where a small gutter of dirty water flowed underneath their feet.
The marriage place was vacated in the early morning before sunrise to enable the merchants to carry their daily business. The marriage was ceremonies with religious rites and jollity.
Ramibai was renamed Ramabai after marriage and later earned the distinction of being called Mata Ramabai Ambedker.
Rambai Ambedkar was illiterate at the time of her marriage but her husband later taught here simple reading and writing. Educationally there was world of difference between the two but they loved and respected each other from the core of their heats. Love, faith, sincerity, sacrifice and understanding links, between the two persons formed unbreakable chain to live happily, despite both being educationally poles aparts, Bhim used to call his wife affectionately as “Ramu” and she called him “Sahib”.
She was deeply proud of her husband and Bhim Saheb respected here hugely. As Dr. Ambedkar was always busy in reading & could devote very little time for house hold affairs.
At times she used to press here sahib’s feet in the evening, when he was reading & slept on the floor under his feet. But Ramabai ensured that nobody disturbed him during this study or working. She cared for the health and welfare of her husband by all means.
On Ramabai insistence and lifelong Dr Ambedker took Ramabai to Pandharpur for pilgrimage of Vithal, in whom she had lot of faith. But being untouchables they were not allowed to go near the temple, so they had to stand at a distance from the temple idol to offer prayers.
It irritated the self-respecting Dr Ambedker and he said “What of that Pandharpur, which prevents its devotees from seeing the image of God, by our own virtuous life, selfless service and spotless sacrifice in the cause of downtrodden humanity, we shall create another Pandharpur. Another Pandharpur! He kept his promise by leaving Hindu religion and embracing Buddhism and re-establishing Buddha in His motherland after centuries. Illness at last over power the weak body physique of Ramabai Ambedkar. At-last on 27th May 1935 unfortunate happen. She passed away at her residence.
Reference: Wikipedia, Dr Ambedkar & His by Danajay Keer.
NEXTVeer Savarkar – the legend