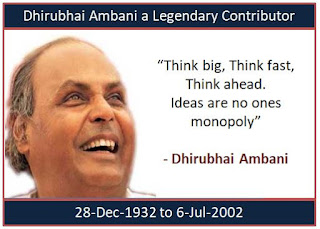 Dhirajlal Hirachand Ambani(Dhirubhai Ambani ) was born on 28 December 1932, at Chorwad, Junagadh (now the state of Gujarat, India) to Hirachand Gordhanbhai Ambani and Jamnaben in a Modh family of very moderate means. He was the second son of a school teacher.
The Founder of Reliance Industries in Mumbai with his cousin.
Dhirubhai took Reliance Industries public in 1977 and by 2002 the combined fortune of the family was $6 billion.
Ever since childhood, Dhirubhai was more keen on work than studies and repeatedly bunked classes and roamed in streets, watching people work and making money.
He’d once said his mother to stop lamenting about the hardships and that he would make ‘heaps of money one day.’ His entrepreneurial career began in his early school years by selling ‘bhajias’ to pilgrims in Mount Girnar over the weekends. On completion of his school studies, his brother Ramnikbhai sent him to Aden, Yemen, which was the second busiest oil banking and trading port of the time.
Dhirubhai Ambani joined the largest transcontinental trading firm named A.Besse & Co as a gas-station attendant, as well as a dispatch clerk. A.Besse & Co would deal in every possible branch of trading from cargo booking, shipping, handling, forwarding, to wholesale merchandising for a great number of American, European, African and Asian companies. His hard work promoted him to maintain and manage company`s oil filling station at the port of Aden.
Dhirubhai once said, ‘More than anything else I learnt that nothing big can ever be achieved without money, influence and power and I also learnt that money, influence and power alone cannot achieve anything in life, big or small, without a certain soft, delicate, sensitive, understanding human touch in all one’s deeds and words.’ In 1958, he came back to India with Rs 50,000 and started the business of polyester yarn import-export at Masjid Bunder of South Mumbai and later founded the Reliance Commercial Corporation with an investment of 15,000. Back in those days Polyester was in great demand across Asian markets and soon his profit skyrocketed.
Dhirubhai continued to live in one bedroom flat with his wife and children for almost a decade until 1968 when he moved to Altamount Road in South Mumbai. In 1966, Dhirubhai started his own textiles manufacturing unit at at Naroda, in Ahmedabad.
He launched his first brand ‘Vimal’ sometime in 1969-70; and in 1975, his manufacturing was visited by a team of technical experts from the World Bank who certified it as ‘excellent even by developed country standards.‘
The biggest breakthrough in his life came in the year 1977, when he managed to attract over 58,000 investors in the very first IPO of Reliance Commercial Corporation; and he never looked back ever since. A humble beginning helped him to stand his empire worth $64 billion.
Dhirubhai built up a textile and Petrochemicals Empire with his dedication, ability to recognize new business opportunities, dare to take risk, never-give-up attitude and intelligence to handle people.
Dhirubhai Ambani Quotes:
Our dreams have to be bigger, our ambitions higher, our commitment deeper, and our efforts greater. This is my dream for Reliance and for India.
Think big, think fast, think ahead. Ideas are no one’s monopoly.
Pursue your goals even in the face of difficulties, and convert adversities into opportunities.
Give the youth a proper environment. Motivate them. Extend them the support they need. Each one of them has infinite source of energy. They will deliver.
Awards and recognition
·      He has been honored for several times for his significant contributions.
·      January 2016- Awarded Padma Vibhushan, the country’s second-highest civilian award posthumously.
·      October 2011-Awarded posthumously the ABLF Global Asian Award at the Asian Business Leadership Forum Awards.
·      November 2000–Conferred Man of the Century award by Chemtech Foundation and Chemical Engineering World in recognition of his outstanding contribution to the growth and development of the chemical industry in India.
·      2000, 1998 and 1996– Featured among Power 50-the most powerful people in Asiaby Asiaweek magazine.
·      June 1998 – “Dean’s Medal” by The Wharton School, University of Pennsylvania, for setting an outstanding example of leadership. Dhirubhai Ambani has the rare distinction of being the first Indian to get Wharton School Dean’s Medal.
·      August 2001 – Economic Times Awards for Corporate Excellence for Lifetime Achievement.
·      Dhirubhai Ambani was named the “Man of 20th Century” by the Federation of Indian Chambers of Commerce and Industry (FICCI).
·      A poll conducted by The Times of India in 2000 voted him “Greatest Creator of Wealth in the Centuries“.
Biography by NCERT OFFICIAL
On Dhirubhai Ambani Memorial Lecture – Reliance Group
By Dr A P J Abdul Kalam
By Shri Narendra Modi
Reference: Wikipedia.
PREVIOUSJack Ma – Inspirational to many young dynamic and ambitious.
NEXTNatasarvabhouma – Dr. Rajkumar.